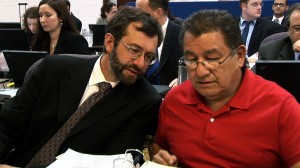 Murray and Sam at the Ipperwash Inquiry

In 1995, First Nation activist Dudley George was shot and killed by police in Ipperwash Provincial Park at a protest seeking to protect native burial grounds and Treaty lands.  Klippensteins acted for the George family in a series of successful legal actions, first against Premier Mike Harris, the province and the police, and later at the public judicial inquiry into Dudley’s death. The Ipperwash Inquiry resulted in wide ranging policy changes in policing and government, and the creation of the Ontario Ministry of Aboriginal Affairs.  As a result of further representations by Sam George and Klippensteins, the Ontario Government returned the Ipperwash Park lands to First Nation control in 2009, fulfilling one of Dudley’s dreams.  Eventually the Government of Ontario and local First Nations jointly erected a memorial to Dudley on the former Ipperwash Park lands where he had died.

Sam George, Dudley George’s brother, was awarded the Order of Ontario for his efforts in pursuing truth and justice. 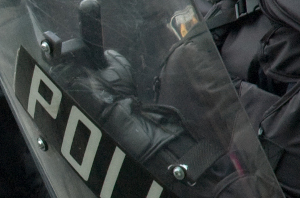 Riot Police at the G20 Summit

In June of 2010, Toronto police conducted the largest mass arrests in Canadian history during global G20 summit meetings in Toronto.  Police arrested and jailed over 1000 people, including peaceful protesters, journalists, legal observers, tourists, and bystanders. The vast majority of those jailed were eventually released with no charges, or were charged with offences that were later stayed, withdrawn, or dismissed. Ontario’s Ombudsman André Marin called the summit policing operation “the most massive compromise of civil liberties in Canadian history.” Klippensteins and Eric Gillespie are co-counsel for a class action lawsuit intended to preserve and affirm the fundamental civil rights of those individuals who were held by police without good cause, and in defence of the rights and liberties of all Canadians.

In the early frontier years of Ontario’s history, a power company built an illegal dam across a major northern Ontario river, flooding parts of the ancestral lands of the Mattagami First Nation, guaranteed to them by Treaty just a few years before. For decades, the First Nation’s letters to the government and to Ontario Hydro complaining of devastation to their harvesting livelihoods were ignored. Finally, the First Nation retained Murray Klippenstein to sue Ontario Hydro and the Canadian government for the flooding and for timber mismanagement. Ontario Hydro settled the case by agreeing to pay millions in compensation for the flooding, plus rent for future use of the land. The Canadian government subsequently agreed to further compensation for other flooding damage and timber losses. 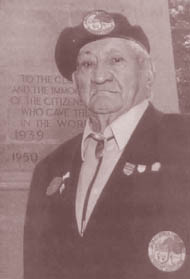 Canadian veterans returning from World War II were offered generous government assistance programmes — except for First Nations veterans, who were simply sent back to their reserves, with a fraction of the farming, housing and educational opportunities that were made available to the non-Natives at whose side they had fought. After decades of fruitless representations by First Nation veterans, Klippensteins was retained as co-counsel to sue on behalf of the Saskatchewan First Nations Veterans Associations, and to assist First Nation veterans at the national level. We began legal proceedings and organized compelling economic expert evidence. In response, the government agreed to a Round Table for discussions and the vets suspended litigation. When the Round Table produced nothing, the veterans declared that they were resuming litigation. The federal minister immediately announced in the House of Commons a $39 million compensation offer.  The new offer formed the basis for further negotiations and an eventual settlement.  The First Nations veterans who had been neglected for decades finally saw a measure of the recognition they had so long deserved.

Lawsuit defending the voices of indigenous Mayans in Guatemala

A Canadian documentary videographer and PhD student traveled to Guatemala and produced a short video (above) chronicling the violent forced evictions of indigenous Mayan families from their ancestral lands in Guatemala by a Canadian mining company. After the film was used by various groups to raise concerns about Canada’s mining practices abroad, Canada’s then-Ambassador in Guatemala slandered and tried to discredit the videographer by falsely stating that the video used old photographs and a paid actress.  Klippensteins represented the videographer in a successful defamation lawsuit against the Ambassador and the Canadian government and won a court judgment that helped to protect the vital testimony of the Mayan Q’eqchi’ who spoke out in the film. 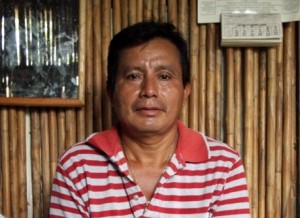 Mayan Q’eqchi’ communities living near Lake Izabal in eastern Guatemala have suffered a long history of brutal violence as a result of Canadian mining in their ancestral homeland. Klippensteins represents 13 Mayan Q’eqchi’ plaintiffs in lawsuits against Canadian mining company HudBay Minerals over brutal shootings and gang rapes committed by mine company security personnel at HudBay’s former mining project in Guatemala. These lawsuits represent one of the first attempts to hold a Canadian mining company accountable in Canadian courts for abuses committed in the developing world. 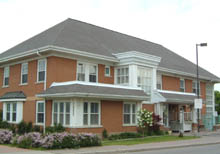 The Womens’ Shelter we Defended

When a non-profit womens’ organization secured funding for a much needed and well-designed shelter for abused and threatened women and their children, the contractor built a lovely facility — and then sued for millions of additional construction fees. The all-women volunteer Board of Directors hired us to defend the Shelter and then stood firm through several years of fierce litigation. Shortly before trial, the contractor agreed to a settlement in which it received nothing. 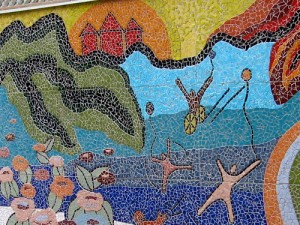 Bridlewood Co-op is a co-operative housing development created in the 1970s to provide good quality, affordable homes and a supportive community to needy families who cannot afford market rent. We represented a resident of Bridlewood and the Co-operative Housing Federation of Canada in their fight against the loss of 131 units of affordable housing in the Windsor-Essex community when some residents attempted to dissolve the co-operative for their own personal profit at the expense of other needy families. In a series of successful Court actions, Klippensteins blocked their various attempts to privatize the housing development, and have ensured that Bridlewood will continue to provide good quality, affordable homes for those in need.

Fighting for the Rights of Cooperative Members: Matthew Co-op 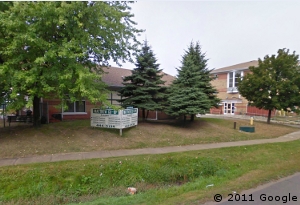 Matthew Co-op is a housing co-operative in the County of Simcoe, Ontario, which is home to over 100 predominantly low-income Ontarians. The County attempted to dissolve the cooperative and purchase the housing, thereby taking away the democratic and participatory rights of the co-op residents. We acted for the Co-operative Housing Federation of Canada in opposing the sale and dissolution of the co-op.

The judge decided in the favour of the co-operative, and rejected the plan to sell and dissolve the co-op. The judge extensively relied on a powerful precedent we set in a previous case about the duty of fairness owed to co-operatives. 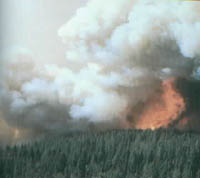 Klippensteins has represented Pollution Probe at more than a dozen major regulatory hearings at the Ontario Energy Board and over the years has used economic and environmental expert evidence and representations to successfully push for aggressive anti-greenhouse gas measures in Ontario’s natural gas sector. As a result of the work of Pollution Probe and its expert Jack Gibbons (and one other environmental intervenor), the Energy Board has required the province’s natural gas utilities to implement major Demand Side Management (DSM) programmes which are reducing Ontario’s carbon dioxide greenhouse gas emissions by more than 21 million tonnes (46 billion pounds).

Preserving a park at municipal council

Parklands preserved by municipal councillor with help of Klippensteins

A public spirited environmental activist was elected to the Municipal Council of a major Ontario city on a platform of saving important park lands from imminent development. After a year of behind the scenes work, as the crucial Council vote approached, a developer who wanted to build on the park lands escalated serious conflict of interest accusations against the Councillor, apparently intending to intimidate the Councillor and defeat the park plan. We provided, on a pro bono basis, strategic advice and legal opinions countering the allegations, helping the Councillor to successfully preserve the park as a natural legacy for generations. 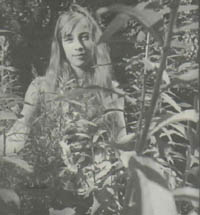 Sandy Bell among the wild primrose of her front yard natural garden.

A Toronto musician decided that she wanted her front yard to become once again a small stretch of original Ontario meadow, with native grasses and flowers serving as a home for butterflies, bees and birds, and as an environmental educational experience for her young son and for passersby. But the City said her natural garden violated the Toronto lawn by-law, fined her and ordered her to cut it down. We went to court for her, saying that she was expressing her fundamental environmental beliefs and that the by-law violated her Charter right to do so. The Court agreed and declared the by-law void, saying that the statement made by her garden about living in harmony with nature was close to the core values underlying s. 2(b) of the Charter. Toronto was forced to amend its by-law to allow natural gardens.

The case is reported in the Canadian Rights Reporter (at 39 C.R.R. (2d) 152), highlighted in Lorraine Johnson’s The New Ontario Naturalized Garden: The Complete Guide to Using Native Plants, and was featured on national television news.

Muruganandaraja Muthiah worked for a bank for many years. Despite his commitment and solid work record, he was fired without cause and without warning by the bank. We acted for Mr. Muthiah to challenge the firing. Mr. Muthiah beat the bank three times in a row – before a federally appointed adjudicator, in an appeal to the Federal Court (2011 FC 77), and in yet another appeal to the Federal Court of Appeal (2011 FCA 276). 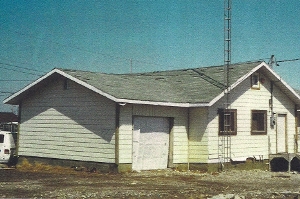 Former police station in Kashechewan. Two young men died in their cells when it burned to the ground in 2006, over five years after a federal government report recommended it be demolished due to its poor, unsafe condition.

In early 2006, despite years of clear warnings of unsafe conditions and chronic underfunding by the federal government, a fire destroyed the dilapidated and unsafe police station in Kaschechewan First Nation in northern Ontario. Two young First Nations’ men were killed in the fire, trapped inside their cells. This case provides a horrific example of the consequences of unequal and inadequate policing in First Nations communities – conditions that would never be tolerated elsewhere in Ontario.

We represented a regional First Nations government in a coroner’s inquest into these deaths. We succeeded in convincing the inquest jury to adopt many important recommendations proposed by our client, including that First Nations policing be brought up to the standards enjoyed in non-First Nations communities.

Our client also filed a related human rights complaint seeking policing that is equal in quality to that found in non-First Nations communities.  The federal government has raised technicalities in an attempt to block and slow down the lawsuit. It argues that policing services in First Nations communities do not need to meet the standards found in non-native communities elsewhere in Canada. In two preliminary decisions, the Canadian Human Rights Commission rejected that argument, and has decided in our client’s favour.